Commercial health insurance claim denial percentages can vary. Some practices or hospitals only have to deal with a small amount of them – 5% for example. For others, that percentage can be as high as 30%. This can be problematic, as you only receive three state-level appeals on those claim denials before you’re stuck with that unpaid amount sitting on the debt side of your balance sheet. For practices that operate on razor-thin margins, high claim denial amounts can lead straight to bankruptcy.

There are two large issues caused by claim denials. We already briefly mentioned one of them – bankruptcy. The other involves the patients who see doctors at that now-bankrupt practice or hospital. Patients like consistency. They choose a doctor, usually a general practitioner, and go back to see him or her regularly. They don’t like change. When that practice goes bankrupt, the patient has little choice in the matter. They can either see that same doctor at his or her new clinic location (usually they find a new job or the practice is purchased by a larger, local chain) or they can find a new doctor. This disruption can lead to issues with the quality of care, medications that get overlooked, or even more billing issues. For example, the patient may want to see that same doctor, but find that their insurance now considers her to be out of network. All of these things are bad news for the patients, as well as reasons why you need to do something about those unpaid claim denials.

Claim Denials Cause Revenue Issues In More Ways Than One

It’s very clear that claim denials cause revenue issues due to a lack of funds. Each one is an unpaid bill that represents the care that went into the patient’s diagnosis and treatment. A patient that goes into a surgical center to have their cataracts removed is handled by nurses and assistants, as well as the surgeon who does the procedure. The recovery room, all equipment and medical supplies, and even the staff who handle the preapproval and pre-procedure paperwork all need to be paid for. There’s quite an expense there, which is why these claim denials are a problem.

However, there’s another expense that isn’t included in this example – the ones incurred by the collections process. According to Matt Hawkins in an article in Becker’s Hospital CFO Report, “We see a lot of health systems and hospitals burning a lot of calories on managing denials and really maximizing their revenue that they rightfully deserve and expending far too many costs and resources in containing that revenue.” This means that those claim denials actually cost money to hunt down. Every time the claim is denied – up to three times at the state level – the practice’s billing employees need to follow up and ascertain the reasons for the claim denial. The results are quite expensive, due to all of the time and energy involved.

What You Can Do About Claim Denials

That same article on Becker’s Hospital CFO Report also points out the issues involved in the management side of things. According to Steven Levin, “Cash flow and profitability are keeping CFOs up at night, and there is frustration with denials and underpayments… There’s not a lot of efficiency or effectiveness in it, and hospitals are working to get back to where they started. Contracts are not black and white, and we spend all this time fighting to get back to where we were in the beginning.” Rather than remain frustrated or accept that your practice is in financial hot water, there are some solutions.

One good solution involves tracking and reporting the claims. There are some factors to look for and catalog. Even though this method does take some time away from other billing procedures in the department (which we already know is operating at its limits), it will help in the long run. You should place someone in charge of noting the following information about every claim denial that comes in:

Of course, none of this helps when the claim denials reach their third state-level appeal, and you have no further recourse. Although you really do have an option at this point; one that you may not know exists. 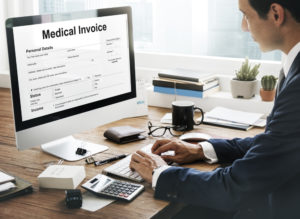 But There’s An Even Better Solution

That solution? Federal ERISA appeals. For those who aren’t aware of them, these appeals are done through the federal government, thanks to the Federal ERISA law (which stands for the Employee Retirement Income Security Act of 1974). Although ERISA was enacted to govern employee retirement plans, it also covers commercial health insurance plans that are self-funded, meaning that the employee pays into them. This gives hospital and clinic CEOs and directors an option besides just rolling over the unpaid claim denials. They can collect on them.

Well, some experts in ERISA can, anyway.

Once your claim denials have run their course at the state level and remain unpaid, you can file an appeal using Federal ERISA law. The only issue here is that your billing employees can’t do this. Not only do they not know how (it isn’t taught in medical billing and coding courses), but they also don’t have the time. After all, you have them chasing down those unpaid claim denials, billing out current procedures and appointments, and tracking the claim denials so that you can examine them to find a solution. Many lawyers don’t even know the finer points of Federal ERISA appeals. This isn’t taught in most law schools. It remains a very specialized collections procedure.

Thankfully, we know someone who can help – us. ERISA Recovery.

What We Can Do For Your Practice

We understand exactly how to deal with your unpaid commercial health insurance claim denials, as our employees have a complete grasp on the Federal ERISA appeals process. This means that we can get that money for you – and we don’t even charge you up front. Yes, we work on a contingency basis.

If you’re ready to wipe your unpaid claim denials off of the wrong side of your balance sheet before you end up going bankrupt, then give us a call today at (972) 331-4140. You can also fill out the contact form on our website and have one of our employees reach out to you. We understand that you’re busy, just as much as we understand that you need to collect on those claim denials.