Appeals Today to Protect your Future

ER claims recovery process acts as a virtual appeals department, providing an outside service that makes full use of the administrative appeal process as defined by ERISA.

Nothing is more frustrating than being unable to work due to having your valid benefits claim denied.

Introduced into law in 1974, the Employee Retirement Income Security Act (ERISA) was originally put in place as a protection in private industry for employees with employer-sponsored pension plans.  The law addressed minimum standards related to these plans and provisions impacting employers, participants and beneficiaries.

ERISA and Healthcare: The Link

Fast forward 40 years and ERISA’s regulatory reach has extended to healthcare.  PPACA, HIPAA and COBRA are some examples of ERISA’s direct connection.  Additionally, though lesser-known, ERISA regulates the operation of health benefit plans offered by employers to employees and retirees.

Under ERISA, health benefit plans are defined as being “maintained by an employer or by an employee organization…for the purpose of providing for its participants or their beneficiaries, through the purchase of insurance medical, surgical, or hospital care or benefits.”

How can ERISA help?

For denials and underpayments, ERISA may be leveraged for certain commercial claims, particularly when reimbursement is less than expected (and deserved) and appeals unsuccessful. ERISA appeals might be the best, last option.  This is especially true when timely filing limits are exceeded and accounts written-off.  ERISA statutes allow for a 10 year look back. Typically we start with the most recent 24 months and then move to prior review periods.  Because ERISA is Federal law, it supersedes payor contracts and State law in most cases (Very useful with Out-of-Network claims appeals).

No.  With expert ERISA resources in place, there is no impact to the existing process and no use of hospital resources.  Since ERISA appeals involve review of written off, no-longer worked commercial claims, there is only upside.  ER handles all of the leg-work.  This includes data-mining denials and underpayments, identifying closed claims with ERISA potential, and managing the appeals process.  Hospital involvement is mostly limited to set-up, which includes establishing secure transmission of data and providing copies of commercial contracts.

1.5% or more of commercial billed charges is typical ERISA opportunity.  This amount can be validated and expanded through ER review of payor contract(s).  Both In-Network and Out-of-Network commercial claims may have ERISA potential.

ERISA represents an untapped source of revenue.  Payors and employers are held to a higher standard.  The focus is providers getting paid as expected and as deserved by using ERISA.  And since ER handles the entire process, there is no reason not to consider using ERISA.

For more information, including a free ERISA analysis, please contact a ERISA Recovery representative at 972 331 4140 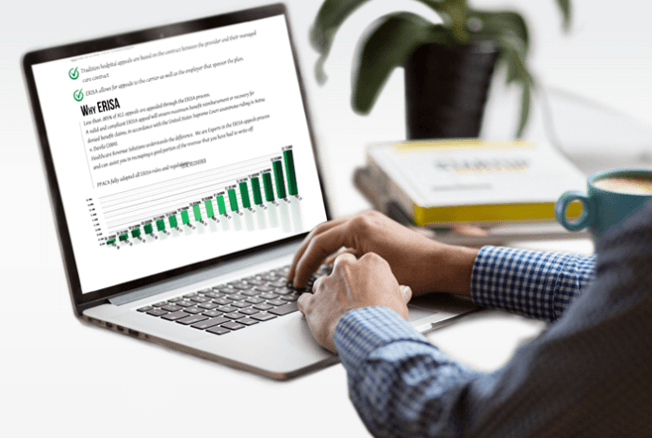